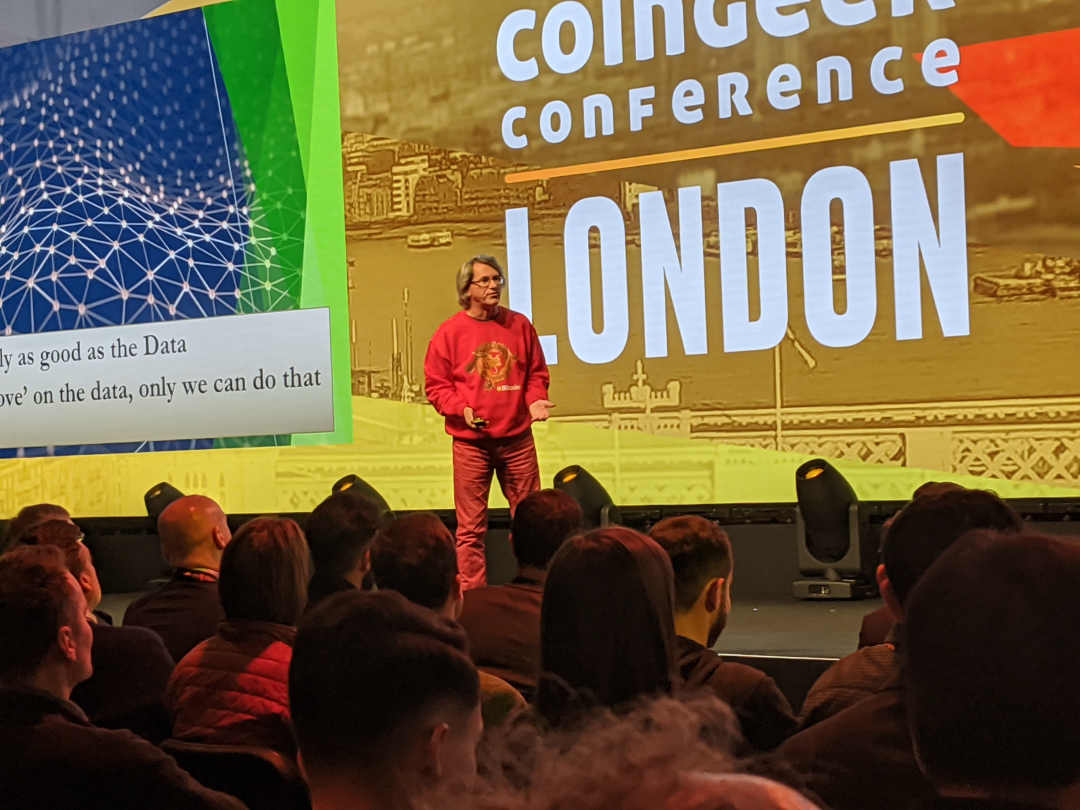 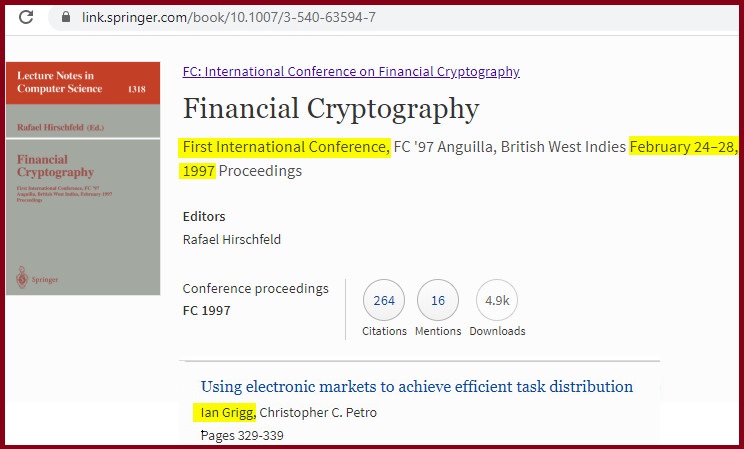 1997/02/24 First International Conference, FC ’97 Anguilla   Financial Cryptography 1998 Financial Cryptography in 7 Layers. He says that many projects fail because they don’t take into account all the various levels of knowledge needed for a successful decentralised system. Might be worth looking into also. 2005  Triple Entry Accounting  Ian Grigg  Systemics, Inc. 2006 05 21 monochrom: Ian Grigg about the Flower Currency Project (1) 2006 11 26 monochrom: Grigg/Lutschinger about the Flower Currency (2) 2014 11 23    Making SSL accessible to all: the CAcert project 2015 02 08 There’s a [crypto] sex bias in the bitcoin world 2015 07 09 Ian Grigg: “FinTech is Nibbling away at Banks’ Capital, in Exchange for their Business.” 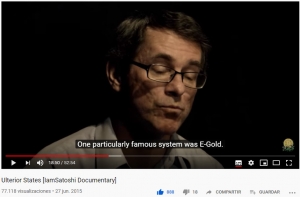 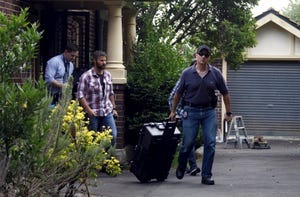 2016 05 02 SATOSHI IS DEAD – LONG LIVE SATOSHI – TEAM LEADER COMES OUT “I confirm that this is true, both from direct knowledge and a base of evidence …, Craig credited the late Dave Kleiman as member of the team. I confirm Kleiman was a member of the team.”. http://wiki.cacert.org/CARS . I should perhaps say a little more about CARS than is on that website seeing as people are keen. CARS stands for CAcert Assurer Reliable Statement. The import of it is that if the CAcert community finds the statement unreliable they can file a dispute into the forum of dispute resolution to seek some relief. It’s never been tested – but it has formed a basis for serious statements within the community. 2016 05 04     [Cryptography] Proof-of-Satoshi fails Proof-of-Proof.   ianG iang at iang.org 2016 07 30   The Satoshi afaire. Andrew O’Hagan Pag. 54 “… Craig talked about Ian Grigg and others who’d ‘outed’ him last year by nominating him for various awards. Satoshi was nominated for a Nobel Prize and a Turing Prize. Wright told me that people in the bitcoin community wanted him to come out and receive recognition. He said it had never been in his interest to come out, but in other people’s interest. ‘I don’t care if people like my work,’ he said. ‘I just have to do my work. That’s the only thing that’ll keep me sane.’ ‘I would like that his reputation.”   2016/10/03 –  151 – Ian Grigg: Ricardian Contracts And Digital Assets Prehistory. YouTube 2016/10/03 – 151 – Ian Grigg: Ricardian Contracts And Digital Assets Prehistory. SoundCloud There’s I guy called Ian Grigg who was involved in the early cypherpunks of the 90s ho is very knowledgeable about Ricardian contracts, which apparently are more expressive form of contract than smart contracts. Here is a podcast of his that the devs of Hashgraph might want to listen to. He’s now working on the EOS blockchain project. Before 2013 few people paid attention to Bitcoin and blockchain, yet even back in the 1990s a vibrant group of prioneers pursued the vision of financial cryptography and digital cash. One of these was financial cryptographer and software developer Ian Grigg, who today works as an architecture consultant for R3. Grigg joined us for a discussion of the history of the digital cash, Bitcoin and his work on Ricardian Contracts, which foreshadowed today’s smart contracts. Topics covered included: – The origin story of financial cryptography – DigiCash and the startup scene around it in the 1990s – Ricardian Contracts and why contracts are central to digital assets – Ricardian Contracts vs blockchain Links mentioned in this episode: – Ricardian Contract Paper bit.ly/2cOnQsU – Financial Cryptography Website bit.ly/2dM4men – Financial Cryptography in 7 Layers bit.ly/2d9GRXT – R3CEV bit.ly/2dVJiRX – Brown, Carlyle, Grigg & Hearn: Corda – An Introduction bit.ly/2dmtPLP 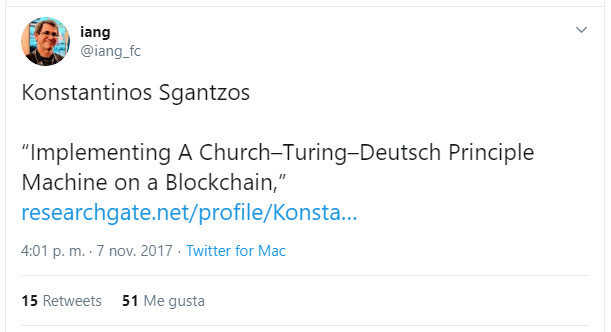 Implementing A Church–Turing–Deutsch Principle Machine on a Blockchain. Konstantinos Sgantzos 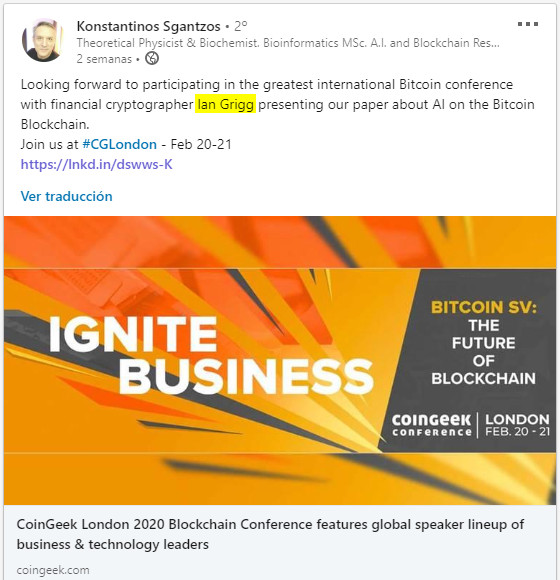 Looking forward to participating in the greatest international Bitcoin conference with financial cryptographer Ian Grigg presenting our paper about AI on the Bitcoin Blockchain. Join us at hashtag#CGLondon – Feb 20-21 https://lnkd.in/dswws-K 2020/01/23  • Scientific research about artificial intelligence on the Bitcoin blockchain will be presented by renowned financial cryptographer Ian Grigg and Konstantinos Sgantzos, Scientific Advisor, Bolooba and Former Researcher & International Lecturer, University of Thessaly