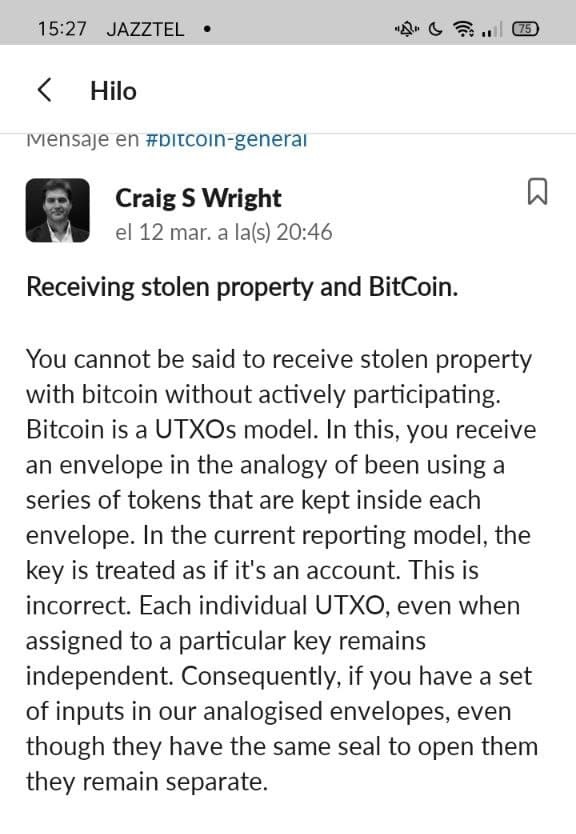 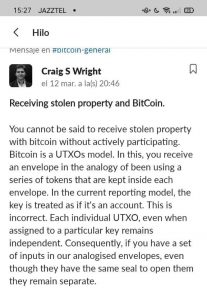 You cannot be said to receive stolen property with bitcoin without actively participating. Bitcoin is a UTXOs model. In this, you receive an envelope in the analogy of been using a series of tokens that are kept inside each envelope. In the current reporting model, the key is treated as if it’s an account. This is incorrect. Each individual UTXO, even when assigned to a particular key remains independent. Consequently, if you have a set of inputs in our analogised envelopes, even though they have the same seal to open them they remain separate.

If you have 500 tokens in an existing envelope and somebody sends 50 tokens to your public key or address, that is you can unseal that new envelope, if you receive that envelope you take responsibility for it. At any point you can return those 50 tokens (with a possible minor loss for mining fees that would not be your responsibility if you are returning tokens).

If you do not know where the tokens of come from or even worse if you do know that they are associated with the proceeds of crime order or could be stolen, the receipt and spending of those tokens will be a wrongful taking.

This also remove some of the issue associated with scaling. You should not be scanning for received bitcoin against the normal Blockchain. When you’re getting paid you would generally know about it. People generally don’t donate money to you randomly. That can be achieved through other means and allow individuals to set up donations and funding channels without having to scan the Blockchain. The SPV model of bitcoin was never supposed to end this way where people sit there watching the entire Blockchain.

There are many ways of notifying people that don’t require them to maintain the existing list of many UTXOs. More importantly, if somebody does inadvertently send you a UTXOs or our analogised envelope that contains stolen bitcoin, if you’re not scanning the Blockchain to collect anything that goes to your addresses without any knowledge of where it came from, you won’t be taking that wallet and putting it into your account. As such, there won’t be a taking. The tokens will be in an envelope that could be addressed to you but remain uncollected. It is the same as if an envelope full of cash that you have no idea about ends up in your post office box. In that case, receiving stolen money is just as illegal in the physical cash as if it was digital.

The way I designed bitcoin is analogous as I’ve said to a set of envelopes containing tokens. Each of these tokens is equivalent in nature to a grain of wheat. When grain is mixed, there are rules in law that allow for the tracing of separations. As bitcoin is fungible, you can trace through a mixture. It is not the same as if you were to mix wheat and rice or wine and vinegar. It is not the individual grains of wheat that matter, rather it is the quantity.

If a miner accepts payment from a stolen property hoard when they know that the particular tokens have come from a wrongdoing, they are facilitating crime. In the event that they are acting on a restitution order and are taking a payment as a bank would for the recovery of stolen property, that will be legal. Helping a criminal move bitcoin and being paid for that service puts the individual node in the position that they are facilitating crime. 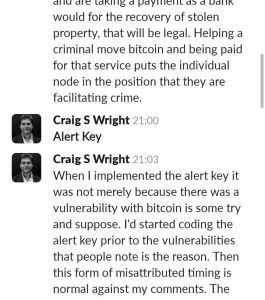 When I implemented the alert key it was not merely because there was a vulnerability with bitcoin is some try and suppose. I’d started coding the alert key prior to the vulnerabilities that people note is the reason. Then this form of misattributed timing is normal against my comments. The 2008 banking collapse came at the time I launched bitcoin but I started coding bitcoin years before without knowledge of the collapse. One of the main reasons for the alert key was to cover theft of bitcoin and in particular proceeds of crime orders. The alert key allowed for the freezing of bitcoin that would be associated with wrongdoings. This would protect nodes. On alert, all nodes would instantly be stopped from transacting on the stolen bitcoin or bitcoin that is under the proceeds of crime order. Such a system simplified many scenarios that apply to miners as they are today.

Just because you receive bitcoin does not make it yours. If you receive money into your bank account and you spend it and it turns out that the money was never yours, you can be arrested for a crime. The same applies to bitcoin. If you don’t know the source of where you obtained individual bitcoin tokens, you put yourself into a large legal risk. This idea of just accepting dust and random payments is foolish at best. The simplest answer would be just to reverse them and send them back to the source they came from. The mentality within the bitcoin community seems to preclude that.

Going back to my original example, if you have 500 tokens and 50 tokens miraculously arrives in a new envelope, you do not have one envelope of 550 tokens. You have one envelope of 500 tokens and a second envelope of 50 that you did not request. If you then decide to move all of the 550 tokens into a new envelope destroying both of the original envelopes or UTXOs, you have actively taken the bitcoin. If you spend the 550 bitcoin or even the 50 bitcoin that you have received that you don’t know the source of, you could be spending stolen bitcoin. Spending stolen property is a good way of getting in trouble. It is a crime. None of this is new because of bitcoin.

People wonder why I used the UTXOs model and not an account based model. It is important because in the account based model that some coins have moved towards, you always end up with a scenario that an unintended party can cause mixing. This can cause loss to an owner who receives stolen bitcoin and is required to return them. In the account model, the original envelope of 500 tokens would be dipped into a new envelope on the receipt of the additional 50 tokens. Rather than having two separate envelopes, we end up with a single envelope containing all 550 tokens. If the owner of the original 500 tokens now seeks to spend their tokens, they can have a scenario where some of the tokens going to miners and others reduce the mixture leaving them at a loss.

In this scenario where both the wrongfully obtained (without knowledge) 50 tokens are in a separate envelope to the honestly obtained 500 tokens, the individual holding the 500 tokens never has their property mixed and will never have a loss associated with the receipt even inadvertent of stolen property.