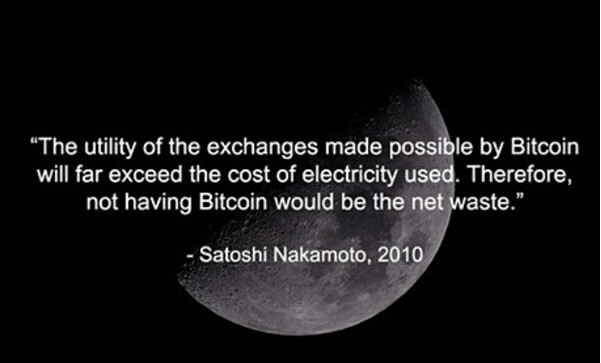 Opinion of people who were in contact with Satoshi Nakamoto

“Either there’s a team of people who worked on this,” Kaminsky said, “or this guy is a genius.” Dan Kaminsky

“I would love to say that I’m Satoshi, because bitcoin is very clever,” Vili Lehdonvirta said, finally. “But it’s not me.”

“…the Bitcoin coder was someone who was very, very smart, but not a classically trained software engineer.” Jeff Garzik

“If you don’t believe me or don’t get it, I don’t have time to try to convince you, sorry.”

I was very interested to read your b-money page. I’m getting ready to

release a paper that expands on your ideas into a complete working system.

Adam Back (hashcash.org) noticed the similarities and pointed me to your 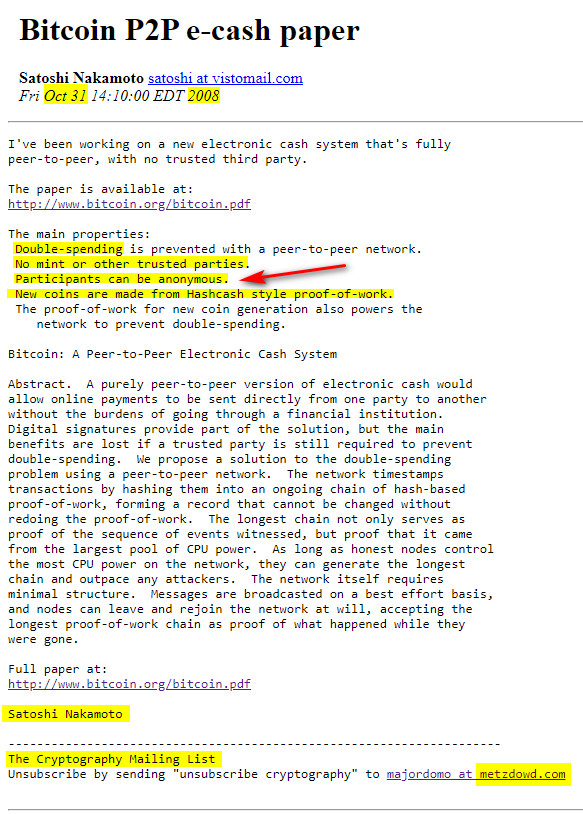 2008-11-17 Satoshi’s source code and a letter from the creator detailing that he sent the “main files” to James A. Donald. “I sent you the main files (available by request at the moment, full release soon),” Nakamoto stated on Nov. 17, 2008

2009/02/11 “The result is a distributed system with no single point of failure. Users hold the crypto keys to their own money and transact directly with each other, with the help of the P2P network to check for double-spending”.

2009/02/15 at 4:42pm Could be. They’re talking about the old Chaumian central mint stuff, but maybe only because that was the only thing available. Maybe they would be interested in going in a new direction.

A lot of people automatically dismiss e-currency as a lost cause because of all the companies that failed since the 1990’s. I hope it’s obvious it was only the centrally controlled nature of those systems that doomed them. I think this is the first time we’re trying a decentralized, non-trust-based system.

2009/04/12 The existing Visa credit card network processes about 15 million Internet purchases per day worldwide. Bitcoin can already scale much larger than that with existing hardware for a fraction of the cost. It never really hits a scale ceiling. If you’re interested, I can go over the ways it would cope with extreme size. to Mike Hearn

2010/06/17 The nature of Bitcoin is such that once version 0.1 was released, the core design was set in stone for the rest of its lifetime.

The script is actually a predicate. It’s just an equation that evaluates to true or false. Predicate is a long and unfamiliar word so I called it script.

2010/06/17 “The design supports a tremendous variety of possible transaction types that I designed years ago”.

2010/06/17 Quote from: laszlo. How long have you been working on this design Satoshi? It seems very well thought out,

“Since 2007. At some point I became convinced there was a way to do this without any trust required at all and couldn’t resist to keep thinking about it. Much more of the work was designing than coding.

Fortunately, so far all the issues raised have been things I previously considered and planned for.”

“The developers expect that this will result in a stable-with-respect-to-energy currency outside the reach of any government.” — I am definitely not making an such taunt or assertion.  Sorry to be a wet blanket. Writing a description

The current system where every user is a network node is not the intended configuration for large scale. That would be like every Usenet user runs their own NNTP server. The design supports letting users just be users. The more burden it is to run a node, the fewer nodes there will be. Those few nodes will be big server farms. The rest will be client nodes that only do transactions and don’t generate.

There’s more work to do on DoS, but I’m doing a quick build of what I have so far in case it’s needed, before venturing into more complex ideas. The build for this is version 0.3.19.

As Gavin and I have said clearly before, the software is not at all resistant to DoS attack. This is one improvement, but there are still more ways to attack than I can count.

I’m leaving the -limitfreerelay part as a switch for now and it’s there if you need it.

“…Until shortly before his absence and handover, Nakamoto made all modifications to the source code himself“.

The misidentification of Satoshi Nakamoto