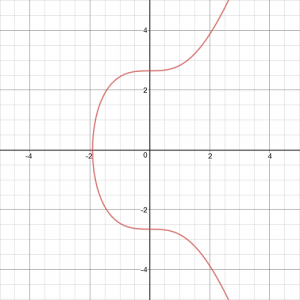 This is a graph of secp256k1’s elliptic curve y2 = x3 + 7 over the real numbers. Note that because secp256k1 is actually defined over the field Zp, its graph will in reality look like random scattered points, not anything like this.

secp256k1 refers to the parameters of the elliptic curve used in Bitcoin’s public-key cryptography, and is defined in Standards for Efficient Cryptography (SEC) (Certicom Research, http://www.secg.org/sec2-v2.pdf). Currently Bitcoin uses secp256k1 with the ECDSA algorithm.

secp256k1 was almost never used before Bitcoin became popular, but it is now gaining in popularity due to its several nice properties. Most commonly-used curves have a random structure, but secp256k1 was constructed in a special non-random way which allows for especially efficient computation. As a result, it is often more than 30% faster than other curves if the implementation is sufficiently optimized. Also, unlike the popular NIST curves, secp256k1’s constants were selected in a predictable way, which significantly reduces the possibility that the curve’s creator inserted any sort of backdoor into the curve.

As excerpted from Standards:

The elliptic curve domain parameters over Fp associated with a Koblitz curve secp256k1 are specified by the sextuple T = (p,a,b,G,n,h) where the finite field Fp is defined by:

The base point G in compressed form is:

and in uncompressed form is:

Finally the order n of G and the cofactor are:

This content is based on content sourced from https://en.bitcoin.it/wiki/Secp256k1 under Creative Commons Attribution 3.0. Although it may have been extensively revised and updated we acknowledge the original authors.